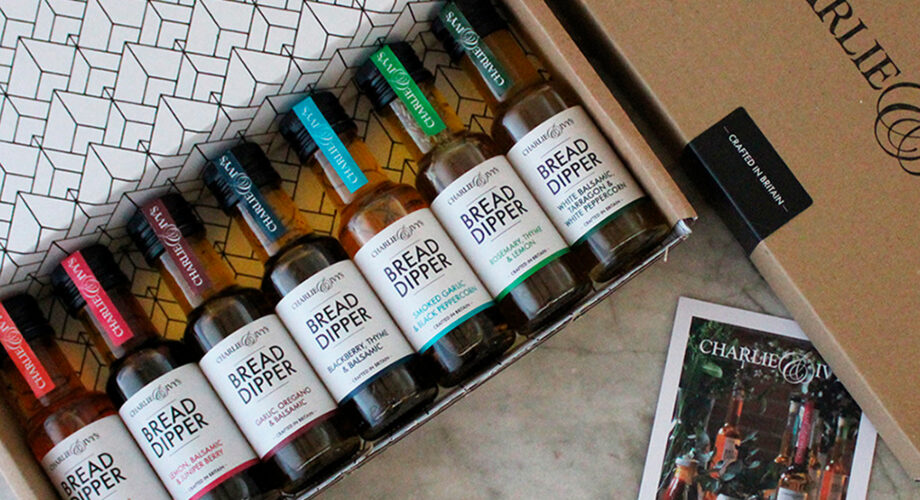 Sometimes, food products look really interesting, but it’s not entirely obvious how they should be used, or what they are intended to go with.

We came across these ‘Bread Dippers’ in a speciality food store in North Yorkshire. They were in amongst lots of wonderful sounding chutneys, oils and relishes that had enticing combinations of lead ingredients, but no obvious practical application. Alongside all the flighty, slightly exotic temptations these stood out as beacons of clarity.

There’s a range of contemporary flavours in elegant bottles, but what caught our attention is the clarity of their purpose – these are oils to dip bread in.

The Americans do this kind of stuff really well – there are an abundance of grocery products on that side of the Atlantic that clearly direct the American consumer as to how they should be used. They value clarity of communication above all else.

Over here in the UK we often pull back from such clearly directive descriptors. We like to stress versatility and to hold back from being prescriptive. We often seem to want to target everyone and every possible occasion.

That’s where marketing can often fall down though – the temptation to allow for broad usage can often mean no usage at all because the consumer becomes confused (or, perhaps, is unconvinced). We once worked on a range of salad dressings that could also be used as marinades, or even as a cooking sauce, that had exactly this problem!

Brands should always have a clear purpose that consumers immediately understand. They need to be attractive, engaging and to be impactful (we talk a lot about making brands ‘instantly interesting’) in order to get noticed and considered, but people also need to know what they are for.

That said, there are occasions when prescribing usage may not be the best thing to do. We were tasked some years ago with identifying the potential opportunity for Aunt Bessie’s to introduce Yorkshire Puddings into the USA.

In the UK their usage is about as clear and single-minded as it could be – they go with roast beef and gravy! The immediate problems were obvious – Americans don’t have the roast dinner culture that we have, ‘Yorkshire’ has very little resonance with most of them, and ‘Pudding’ implies a sweet dessert…

We allowed American consumers to take some of the products home and observed how they used them without any direction. In this instance, the versatility of the product was a clear virtue.

We’re not sure how well the Bread Dippers are currently selling, but if they don’t have a lucrative future it won’t be because people were in any doubt about what they are good for! Doing one thing well is usually better than being a jack of all trades…

There’s no substitute for being there